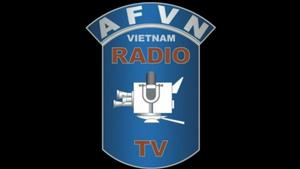 Click the Play button above to listen to the podcast. You can also adjust the volume,
and download the podcast file from the above control.

"It was a phrase I shouted virtually every weekday at 6 a.m. from the studios of the American Forces Vietnam Network in Saigon between October 1968 and December 1969. I wasn’t the first to use those memorable words—that was Adrian Cronauer, who was famously portrayed by Robin Williams—but that became the signature sign-on of every early-morning DJ on AFVN.

Before I was Pat Sajak of ‘Wheel of Fortune,’ I was Pat Sajak Vietnam DJ - I was an Army Spc. 5th class who had joined the service, been trained as a clerk typist, was sent to Vietnam as a finance clerk. After repeated attempts, I had been transferred to Saigon to be a disc jockey, as I had been in civilian life. The Army can work in mysterious ways."

As anyone who hasn't been in a coma the past 30+ years knows, Sajak has been the iconic host ot "Wheel of Fortune".    But many don't know that Sajak served in Vietnam - fortunate enough to avoid frontline action and stationed in Saigon as a disc jockey on American Forces Radio.    He left training as a specialist fifth class, a clerk typist, and was headed off to be a finance clerk, but was transferred to Saigon to work on the radio instead.    Born in Chicago in 1946, Sajak found his start in broadcast through Columbia College Chicago, where an instructor helped him get a job for a local radio station, WEDC.      Sajak dived into the the world of entertainment and hasn't looked back.

Although Sajak's position helped him gain experience for his career as an entertainer, he is humble about having it better than most:

"I used to feel a bit guilty about my relatively soft duty. After all, I was billeted in a hotel and there were plenty of nice restaurants around.   I always felt a little better when I met guys who came into town from the field and thanked us for bringing them a little bit of home. I always thought it strange that they should be thanking me, given what so many of them were going through on a daily basis."

Like every other military occupation,  tours end and replacements must be put in place, which is how Sajak ended up as the "morning man" on AFVN.     To provide some continuity in programming no matter who was at the mic, each shift was given a name, and the early morning show was called the "Dawnbuster".    Which meant that Sajak actually DID the job that Robin Williams portrayed in the movie "Good Morning Vietnam",  as one of the previous Daybusters,  an Air Force Sergeant named Adrian Crounauer.   It was Crounauer who came up with the trademark "Good Morning Vietnam" shout-out over the air, and the idea stuck and became part of the show traditions.   At the start of the clip presented here, you'll hear Army Spec. Pat Sajak belt out his version of the famous phrase, which was heard "From the Delta to the DMZ".

After Sajak returned to the United States, he continued to work in radio. working first for a station in Kentucky, then moving to Nashville. KNBC in Los Angeles hired him to do the weather in 1977. And four years later, Merv Griffin asked Sajak to do Wheel of Fortune. The rest, literally, is Sajak’s history. He’s been spinning the wheel and selling vowels ever since, surpassing Bob Barker to become the longest-running game show host in television history.

WTWW programming is now on WRMI